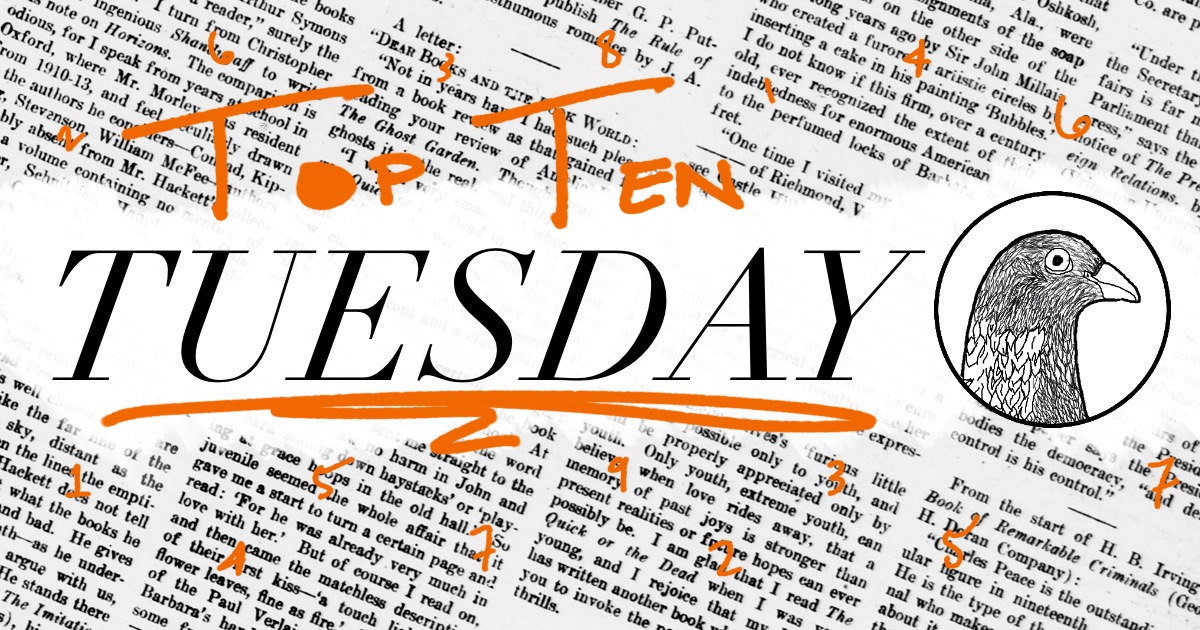 Top Ten Tuesday is a series hosted on That Artsy Reader Girl! This week, we’re looking back at tantalizing new releases from a year already past. I’m known to revive the backlist, so there’s a good chance I’ll still get to these in the years to come…

June C. L. Tan’s epic fantasy debut turned my head from the get-go: worldbuilding inspired by Chinese mythology, a slow-burn romance between reluctant allies, and an exiled prince’s quest to reclaim the throne all make for a rather enticing pitch––a pitch made even more impressive by the fact that Jade Fire Gold goes after them all as a standalone. It’s rare that I see a recent YA, especially, try to capture that kind of scale between just two covers (and for good reason! It’s difficult to do justice in even two or more books!), and for that reason, as well as the author’s Zutara comparisons, I’m still eager to see how Tan manages it in her hotly-anticipated debut.

Once upon a time, there was a horrible girl…what more could one ask of a book, really? Margaret Owen’s thoughtful, textured Merciful Crow duology was enough to pique my interest in whatever she wrote next, but Little Thieves, a wicked, sharp-tongued retelling of “The Goose Girl,” invites its own enthusiasm. Following the crafty servant girl who stole the real princess’ crown in the original tale, this work of fantasy has earned plenty of praise from reviewers whose tastes I share, and it’s a promising potential romp.

3. Down Comes The Night by Allison Saft

Released in March, Down Comes The Night, another YA fantasy debut, offers enemies-to-lovers romance between characters trapped in a cursed manor. Besides my contractual obligation to pick up anything with even a passing resemblance to Jane Eyre, Down Comes The Night hooked me with promises of a snow-drenched wintry setting and a main character who knows her way around medicine, and its beautiful spine has been beckoning me from my shelf since its release date––perhaps I’m just waiting for the perfect stormy night to dive in.

After beefing a little with Cytonic, the third book in Brandon Sanderson’s pilot-minded YA space opera, I stalled on picking up the novellas, all e-books following side characters that dropped in the months surrounding its release. I still want to hop back into this galaxy and follow FM, Alanik, and Jorgen (my inevitable favorite!) on their respective adventures, but for now, I’m happy to wait until they’re re-released in a paper-and-ink bindup in April, because me and e-books just don’t mix.

My Lady Jane, the first in a series of zany, magical, ahistorical adventures involving famous Janes, was a fast favorite for me in 2016, and, on the authority of a 2020 reread, likely poised to be a lifelong one! Last year, one of the characters who appears in the book, a young Mary Queen of Scots, got her own story as the first in a trilogy of Mary-themed books, and My Contrary Mary landed itself on my ever-growing TBR pile. I can’t say when I’ll pick it up, but when the desire next strikes me to read about historical figures turning into ferrets, birds, and/or mice, this will certainly be the first place I turn.

6. Instructions For Dancing by Nicola Yoon

Nicola Yoon’s The Sun Is Also A Star is a star among the few contemporary novels I find myself reading these days. It renders real-life settings in Manhattan with the wonder of fictional ones, crafts a love story that thoughtfully accompanies its romantic leads’ search for meaning, and totally made me cry. Of course I’d have my eyes peeled for Yoon’s follow up! Instructions for Dancing, released in May, follows a girl disillusioned with love after happening upon the power to foresee how a relationship is fated to end, as she stumbles into her own love story in the world of ballroom dance. Having a fondness for dance stories (and romance with magic-lite à la Instant Karma), I’m likely to fall in love with this, too.

7. The Lady or The Lion by Aamna Qureshi

Another intriguing retelling with a somewhat niche source, The Lady or the Lion puts a YA spin on the short story “The Lady or the Tiger,” a tale that, depending on how you read it, is about a princess who sends her beloved into a tiger’s jaws…or a happy marriage. Aamna Qureshi’s original take on it stages the action in a Pakistan-inspired fantasy setting, where a crown princess must decide whether she can trust a mysterious ambassador, or if her dangerous feelings for him will lead her astray. This book’s premise had me at “court intrigue” and “forbidden love,” and I can’t wait to be swept away by it.

8. Small Favors by Erin A. Craig

Released in July, this fantasy by the author of House of Salt and Sorrows (the first title reviewed on the blog!) is set in an isolated small town where the surrounding woods are still believed to harbor demons. Promising eerie atmosphere, secluded horror, and bees (?), Small Favors gives me high hopes for another dose of the rustic, gothic-tinged chills of Erin A. Craig’s gorgeous, ocean-tossed debut.

The odd non-fantasy duck on this list, The Hawthorne Legacy is the 2021 sequel to 2020’s The Inheritance Games, a riotously fun thriller-lite about a girl who inherits a fortune from a billionaire she’s never met. It has puzzles, a compelling supporting cast, and some solid twists, but it’s the love triangle that has me chomping at the bit for book two, and since this gives me the chance to say it, Team Grayson. Obviously.

10. Once Upon A Broken Heart by Stephanie Garber

I haven’t read Garber’s much-beloved Caraval trilogy, but the premise of Once Upon A Broken Heart, set in the same world with what I’m told are a few familiar faces, was too good to resist. I love a good “favor by a god in exchange for a kiss” story, and Garber’s reputation for bringing the spirit of fairy tales into her novels un-subtly suggests that this’ll be right up my alley. (Though a few people have told me I’d love Caraval, so it’s possible I’ll go for that first!)

Thank you so much for reading! What are some releases you ‘missed’ last year? Have you read any of these titles? I’d love to hear your thoughts in the comments below 💕